Skip to content
Follow "The Lodge" Caravan – On Tour without the kid's on WordPress.com
Posted on 3 June, 2018 by lodginski

Well we have been in Lightning Ridge for a few days.  We spent a long time coming from St George.

We detoured to see some silos in colour at Thallon.

Then it was off to our final destination.  Came across a bakery that was supposed to be really good.  Forced myself to have an apple turnover from the Dirranbandi.

Every day at 4.30 pm they have an afternoon show.  It is put on by Mel and Susie who are bush poets that we have seen at Stone the Crows.

When we arrived in to the shed we got a Queensland greeting of “Aaaahhhh”.  Seen you before, they say, are you on a holiday.  We told them we had not been home yet.  They put on a different show every night.  Sometimes they even refer to the script.  Does not matter how many times we see them, they are really special.

We even went to the Gallery of John Murray who paints bush scenes that are different.  A piece of his art is a van that is elevated in the town. 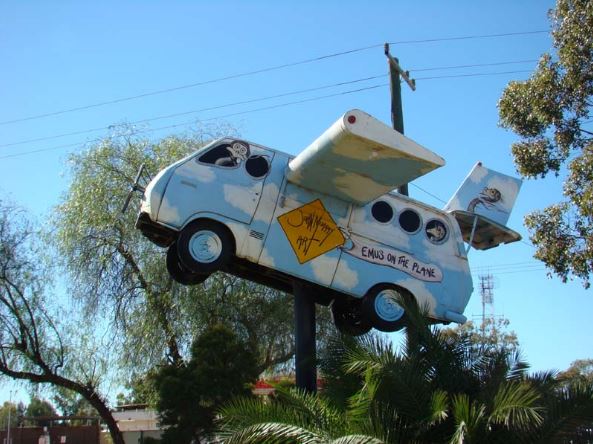 Well, the next day we were invited to morning tea at a location to be revealed as we got closer, like walking in through the gate. Followed Susie along a gravel road that is straight out of a rally book.  However we arrived at a herbal bath retreat managed by Susie. It is really a dam they use for watering the garden.  We felt very privileged to be be invited by Mel and Susie to their beautiful home.

The garden is something that is special in a place like Lightning Ridge.

The pathway is mosaic.

The unbelievable part is that the home was built by and lived in by John Murray himself.  He forgot to take a a few items so that Mel and Susie could enjoy the property. Do not think this is going anywhere. 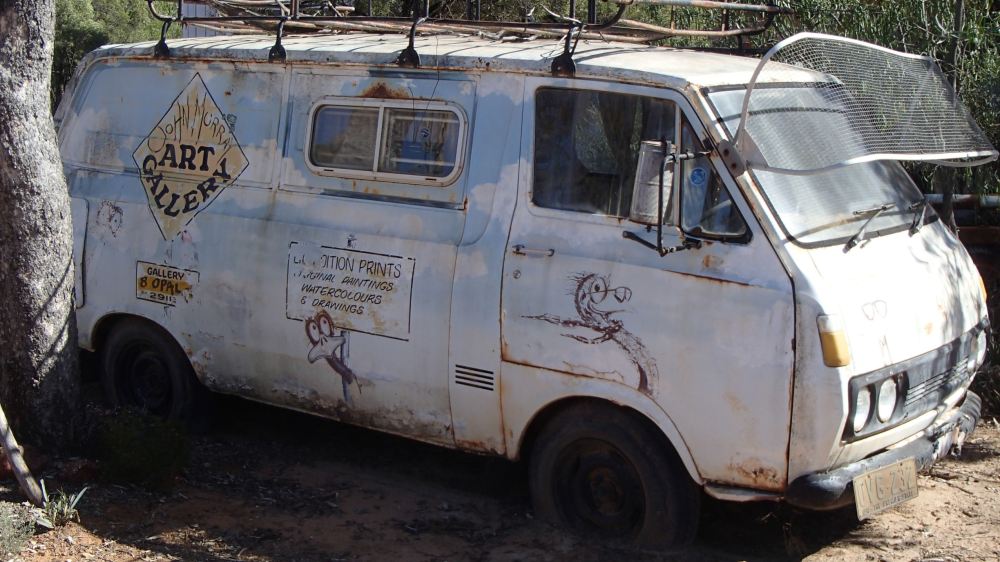 The majority is as it was originally built.  Notice the pallets used as the bench tops.  It was explained that Lightning Ridge was and is the recycling capital.

Morning tea was something to be seen to be believed.  All cooked by Mel.  The record for scone eating was eight.  Lorraine was telling me to leave the record intact.  Mel was looking for a challenge.  It is still eight. For the tour and the morning tea they could easily charge $30 – $40. Leo who is sitting in the bottom right hand corner does a very good poem disguised as Frank Spencer.

Susie wanted a set of gates so made her own.

We also went to Grawin for lunch.  The Glengarry Hilton is an interesting place to go fossicking whilst waiting for the best hamburger and chips.

Enjoy Sea Kayaking, Mountain and Road bikes and Caravaning. Live in South Australia, the best state in Australia with the best wine. Worked in the one organsation for 43 years. Fortunately a great place to work, with great people and a wonderful team. Paddle with another group of wonderful friends - have done so since 1998. Have paddled to Tasmania from Port Welshpool - Victoria an another half from Little Musselroe Bay to Killiecrankie View all posts by lodginski